Monte Carlo generators allow to include theoretical models, phase space integration in multiple dimensions, inclusion of detector effects, and efficiency and acceptance determination for new physics processes.All event generators split the simulation up into a set of phases, such as initial-state composition and substructure, the hard process, parton shower, resonance decays, multiple scattering, hadronization and further decay. As a result, event generator produces the final-state particles, which feed into the detector simulation, allowing a precise prediction and verification for the entire experimental setup.

The MpdRoot framework supports an extended set of event generators (physics models) for particle collisions, which are commonly used in HEP experiments, such as:

The figure 1 shows the place of the event generators in the data processing chain and the further steps of simulation in particle physics. 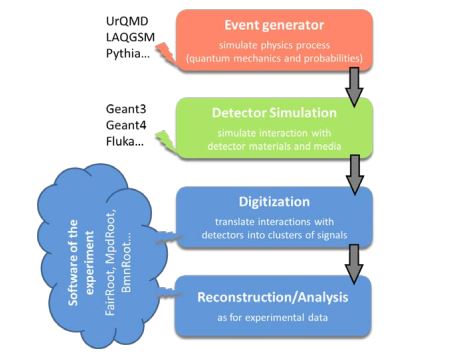 Partly due to historic reasons, many event generators are written in Fortran, newer ones are usually implemented in C++ language. Most particle collision (event) generators produce files of own format, which is then used in simulation of the experiment.The figure2 presents the steps above with file storage levels of the MpdRoot in more details. 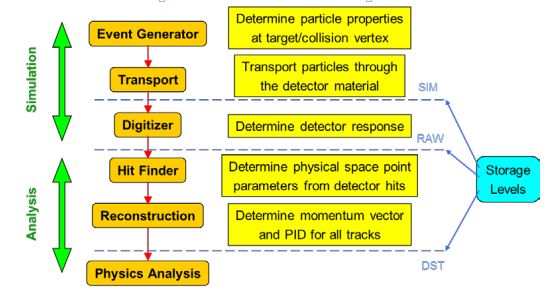